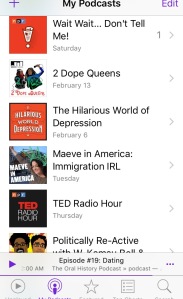 In my life, I am always doing one of four things: reading, writing, interacting with other humans, or listening to podcasts. The “why” to the first three is pretty obvious (correspondingly: obsession, obsession, and a begrudging acquiescence to societal expectation). The “why” to the fourth one is this: I like learning and I hate silence. HATE IT. Silence means a chance for my brain to be like, what do you want to think about? How about your to-do list? How about your insecurities? How about how terrifying parenting is and what if you’re screwing up your kid beyond all repair? HOW ABOUT THAT ONE TIME IN 1986 WHEN YOUR PANTS RIPPED AT SCHOOL AND YOUR DAD HAD TO COME GET YOU? HOW ABOUT THE FUTILITY OF LIFE? HOW ABOUT THE SOUND OF THE ENDLESS SCREAM OF ANXIETY?

I know. Why would I want to drown out all of that?

Things I do while listening to podcasts: clean, shop, drive, sleep, yard work, exercise, brush my teeth, pay bills, and literally everything else a person does while personing.

These are my go-to podcasts. If your brain likes to try to consume you alive when there is silence, maybe you need to build your podcast list. All descriptions from the podcasts’ websites.

NPR’s weekly current events quiz. Have a laugh and test your news knowledge while figuring out what’s real and what we’ve made up.

Join the 2 Dope Queens, Phoebe Robinson and Jessica Williams, along with their favorite comedians, for stories about sex, romance, race, hair journeys, living in New York, and Billy Joel. Plus a whole bunch of other s**t.

Objects hold history. They’re evocative of stories stamped in time. As part of The Washington Post’s coverage of the Smithsonian’s new National Museum of African American History and Culture, people submitted dozens of objects that make up their own lived experiences of black history, creating a “people’s museum” of personal objects, family photos and more.

The Historically Black podcast brings those objects and their stories to life through interviews, archival sound and music. The Washington Post and APM Reports are proud to collaborate in presenting these rich personal histories, along with hosts Keegan-Michael Key, Roxane Gay, Issa Rae and Another Round hosts Heben Nigatu and Tracy Clayton.

The Hilarious World of Depression

A show about clinical depression…with laughs? Well, yeah. Depression is an incredibly common and isolating disease experienced by millions, yet often stigmatized by society. The Hilarious World of Depression is a series of frank, moving, and, yes, funny conversations with top comedians who have dealt with this disease, hosted by veteran humorist and public radio host John Moe. Join guests such as Maria Bamford, Paul F. Tompkins, Andy Richter, and Jen Kirkman to learn how they’ve dealt with depression and managed to laugh along the way. If you have not met the disease personally, it’s almost certain that someone you know has, whether it’s a friend, family member, colleague, or neighbor. Depression is a vicious cycle of solitude and stigma that leaves people miserable and sometimes dead. Frankly, we’re not going to put up with that anymore. The Hilarious World of Depression is not medical treatment and should not be seen as a substitute for therapy or medication. But it is a chance to gain some insight, have a few laughs, and realize that people with depression are not alone and that together, we can all feel a bit better.

With all this talk about wall building, bad hombres and refugees as Skittles, comedian Maeve Higgins is beyond ready to change the conversation around immigration. She’s traveled all the way here from Ireland to bring you funny, beautiful and sometimes maddening immigration stories, told by the people who’ve lived them.

The TED Radio Hour is a journey through fascinating ideas: astonishing inventions, fresh approaches to old problems, new ways to think and create. Based on Talks given by riveting speakers on the world-renowned TED stage, each show is centered on a common theme – such as the source of happiness, crowd-sourcing innovation, power shifts, or inexplicable connections. The TED Radio Hour is hosted by Guy Raz, and is a co-production of NPR & TED.

With the political circus of the 2016 presidential election heating up, you can laugh or you can cry. Choose to laugh. Comedians and longtime friends W. Kamau Bell and Hari Kondabolu have a shared curiosity about our political process and constantly changing electoral landscape. Whether it’s an interest in exposing the unjust or the absurd, you can count on Hari and Kamau to ask the important “why?” Why do we have super delegates? Why are people still having such trouble voting? Why was Joe the Plumber a thing? They’ll try to answer questions like those each and every week throughout the election.

Ever find yourself in a conversation about race and identity where you just get…stuck? Code Switch can help. We’re all journalists of color, and this isn’t just the work we do. It’s the lives we lead. Sometimes, we’ll make you laugh. Other times, you’ll get uncomfortable. But we’ll always be unflinchingly honest and empathetic. Come mix it up with us.

Hosted by Kelly McEvers, Embedded takes a story from the news and goes deep. What does it feel like for a father in El Salvador to lie to his daughter about the bodies he saw in the street that day? What does it feel like for a nurse from rural Indiana to shoot up a powerful prescription opioid? Embedded (EMBD) takes you to where they’re happening.

Appointment Television is a podcast about the TV you want to make time for. Every Thursday Margaret, Kathryn, and Andrew will revisit old shows, discover new ones, and debate everything from highbrow dramas to episodes of The Bachelor.

SEX & BOOKS: TWO THINGS THAT ARE BETTER WHEN YOU TALK ABOUT THEM. Hosted by YA writers Carrie Mesrobian and Christa Desir.

JUDGE JOHN HODGMAN is a weekly podcast in which I, John Hodgman, listen to real life disputes on issues such as:

-is chili a soup or a stew?

-when is it may someone else’s Chinese food be legally considered abandoned property?

-is it OK to rifle through the trash for prize coupons in a Canadian pizza parlor?

-is a machine gun a robot?

Then I tell the disputants who is right and who is wrong.

Bullseye is a public radio show about what’s good in popular culture. With a keen editorial eye, Bullseye sifts the wheat from the chaff, and brings you hot culture picks, in-depth interviews with the most revered and revolutionary creative people and irreverent original comedy.

Bullseye is equal parts funny and fascinating. Whether you’re already plugged in to the culture map, or looking for a signpost, Bullseye will keep you on target.

Pop Culture Happy Hour is a lively chat about books, movies, music, television, comics and pretty much anything else that strikes a nerve, all in a weekly roundtable from NPR. Features “Monkey See” blogger Linda Holmes and an occasionally rowdy cast of characters.

Radiolab, with Jad Abumrad and Robert Krulwich, is a radio show and podcast weaving stories and science into sound and music-rich documentaries

There’s a theme to each episode of This American Life, and a variety of stories on that theme. Most of the stories are journalism, with an occasional comedy routine or essay. There’s lots more to the show, but it’s sort of hard to describe.

The Longest Shortest Time is a bold, daring podcast about parenthood in all of its forms. But you don’t need to be a parent to listen. We tell stories about the surprises and absurdities of raising other humans—and being raised by them.

(Oh, and we were on this podcast!)