I told you I was maybe only going to write about my dogs on here.

Let me tell you a story.

Once upon a time (2004) in a land far, far away (Boston), I told Matthew it was time we got a dog. We’d moved from our small apartment right by Fenway Park to a slightly bigger apartment, with a yard, in Brighton. I was done with grad school. It was time. So we found a dachshund puppy online—a lovely little teeny tiny red dachshund.

That puppy failed to thrive and died. I was heartbroken. I came home from work one day soon after that and Matthew said he’d found a family whose dachshund had puppies. So off we went to see them. When we got there, a little black boy dachshund was rolling around outside in the dirt.

“We just bathed him!” the woman told us exasperatedly.

Inside the house, we were greeted by all of the other puppies and the parent dogs. The other little boy dachshund immediately glommed onto me. He sat with me. He pawed at me. He followed me into the bathroom. He seemed nice and big—after the little red dachshund dying, I was nervous about smaller dogs.

Meanwhile, the little runty boy dog, the one who’d been rolling in the dirt, came out from under the couch, dust bunnies all over him. Matthew instantly loved that hilarious little runt.

“He costs less,” the woman said. “He was the runt and has an extra toe.”

She left us alone to decide who would go home with us. We each had a dog we wanted. When she came back in the room, Matthew said, “How much for both of them?” She burst into tears, thrilled that the brothers would stay together.

I don’t have to tell you that one who was instantly loyal to me was Edward and the mischievous little weirdo was Billy, right? 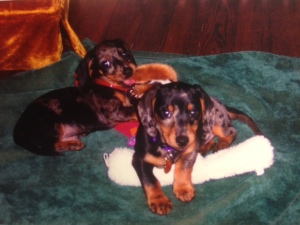 And so they came home with us. Both dogs had to eat out of my hand; the bowls seemed to terrify them. Billy was too scared to cross thresholds, so we’d have to lift him up to move him from the kitchen to the hall. Edward, who came to us named Tippy (NO), caught on to most things quickly. Billy, who came to us named Billy (and after observing him for a bit, we thought, hmm, he’s charming, but he may have a hard time learning his new name), was a little slower. The boys were good company for each other. Matthew worked in the Pru running a Barnes & Noble and I was in Brookline Village at The Children’s Book Shop. Our days were sometimes long, but knowing the dogs had each other was nice. They’re good buddies to each other. They’ve never spent a night apart. 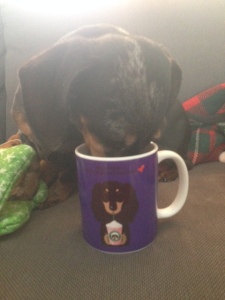 My dachshunds have now outlived the ones I grew up with, Ludwig and Gus. They have exceeded the average life span of a doxies (12 years, 7 months). What this means for Edward is he is slowly showing more signs of being deaf, of degenerative disc disease, and of arthritis in his hips. What this means for Billy is… well, Billy seems to have decide that these bonus months (and hopefully years) are just Billy Time. He’s become worse than ever. Drinking my coffee, repeatedly? Sure! Ambushing his brother and stealing toys right out of his mouth? Yep! Hoarding all of the best toys under the bed, where it’s hard for Edward to go? Of course! Any place is fair game for going potty? The baby gates I now use to block our dining room and sitting room indicate YES! BILLY TIME!

Someday there will only be one dachshund brother. Then none. Then I have to assume I will disintegrate in a pile of dust, desiccated from tears.

But that day is not today. Today, I celebrate my canine best friends (who, let’s be real, I like waaaay better than most people) who have been a constant source of comfort, entertainment, and joy. They’re now simultaneously moody teenagers and cantankerous old men. Lucky us.

No, really; lucky us. 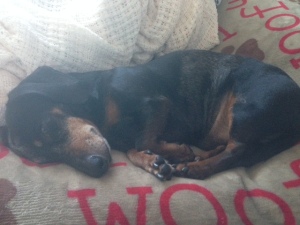