That what the humane society said about Oscar, our fantastic new dachshund. “Unadoptable.” Someone abandoned him, tied him outside of the humane society, and the humane society took one look at this scrawny dog with a mouth full of rotting teeth and said, “Unadoptable.” They put him on the immediate euthanasia list. Thank goodness a rescue group swooped in and saved him. They got him the dental care he needed (which resulted in all but his back molars, one on each side, being pulled). They fostered him. They took him week after week to an adoption event, where this scared little dog who had lost everything he knew, sat trembling and snarling at people who wanted to see him. He was scared. Strangers were strangers. He went back to his foster home week after week. Was he unadoptable?

When we met him, he didn’t seem to like us. We kept telling ourselves that he was scared. He’d been through a lot lately. He had a mouth full of stitches, a broken jaw, and probably had no idea what was really happening. He liked his foster mom and no one else. He didn’t want to walk with us around the store—he reluctantly was dragged. He didn’t want to look at us. He certainly didn’t want us to touch him—that toothless little mouth snarled and snapped when we tried to hold him. But we understood he was totally out of his element. We gave him a chance. And by the time we were in the car and on our way home, he was snuggled up next to Callum. He came into our house, sniffed our dogs, and wagged his tail nonstop. By the second day, we could lift him without him snapping at us.

He was been with us for a month and a half and is the most loving, well-behaved, friendliest, most affectionate little dog ever. He wags his tail all day long. He loves snuggling under blankets to nap, sitting in Matthew’s office all day while he works, and following us everywhere. He does not love when he’s left alone in a room and can’t see his people. He will jump over our gates to get to us. His stitches are all gone, his jaw is healed, and we’re feeding him all the time to try and help him gain weight. We don’t know his past—we only know he is a dachshund of indeterminate age who was left tied outside of a humane society. We don’t know his real name, but he is starting to respond to Oscar (the name the foster family gave him). We do not know if he was loved or cared for or abused or why he was neglected. We went in knowing only two things: he was deemed “unadoptable” and our hearts were open to bringing him home in any condition with any personality. He has proven to be a far more loving dog than we could have imagined. 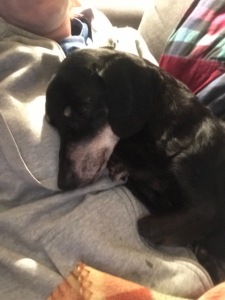 When we went to the adoption event, Oscar was the only dog to go home with a family that day. He was not unadoptable. MacGregors do not like being told what to do. We do not like blanket statements. We like a challenge. “Unadoptable,” huh? Okay—sold. We will take him. We will show you. We will adopt this dog so hard.

I get weepy about, oh, once a day when I think of sweet, scared, abandoned Oscar. Of how close he came to just being put to sleep before anyone bothered to see beyond his outside, beyond his fear and baggage. It’s a good lesson for everyone. We are far more than our labels, than things people say about us, than assumptions, than first impressions. We have gone through hard things, but those things don’t make us unlovable or undeserving of love. They don’t make us incapable of fresh starts, of needing and taking second chances. No one is any one thing. The story they made up about Oscar—this is a mean little dog who has been so severely neglected that no one would want him—was not true at all. AT ALL. Thankfully, we are skilled in understanding fictions—that there are unreliable narrators, that stories are often told from only one perspective, that there is always more to a character’s backstory than you see right away.

The true story of Oscar is this: He got to start over. He has plenty to eat, a dog bed in almost every room, two brothers to cuddle up with at night, and a family who adores him. He is friendly and easy-going and will snuggle anyone. He is more than just the story that was told about him. He is not “unadoptable.” He is a little dog that we now can’t imagine life without.